I have droned on and on, to your great boredom, about how I love romance and how my second love is the mystery-romance-historical combo, like Deanna Raybourn, or Susanna Kearsley, C. S. Harris, Jennifer Ashley … *sobs* and the no-longer-writing-new-Renegades-of-the-Revolution Donna Thorland. Let’s face it, I love the hybrids as much as I love romance, so let’s let that second love thing die. Now, with Tessa Arlen’s first in A Woman of WWII series, I’m adding another much-anticipated series to the beloved list. Given the stay-at-home state of things, Arlen’s Poppy Redfern and the Midnight Murders made for the perfect comfort read: with a Christie-Foyle’s-War-inspired English village + eccentrics setting and intrepid, engaging, loveable heroine, the eponymous Poppy, a too-charming-for-his-and-Poppy’s-own-good American Army Air Force hero …  and no less than a Midsommer Murders corps of village-body-count! While I toiled away at WFH and dabbed lipstick for Zoom meetings, I enjoyed, in the time-interstices, my reading of Poppy, her American hero, and their joint sleuthing. END_OF_DOCUMENT_TOKEN_TO_BE_REPLACED

Mariah Fredericks’s second Jane Prescott mystery, Death Of A New American, has a rich, layered, vivid backdrop: 1912 New York. Indeed, Fredericks’s vibrantly-rendered historical detail may be as immersive and compelling as her mystery and characters. Of the latter, her amateur sleuth, lady’s maid Jane Prescott, is eminently sympathetic: intelligent, observant, and compassionate. Jane’s lowly social status allows her the freedom to fade into the background and take in the details of the wealthy, privileged, and as aristocratic as Americans can be, families she serves. Fredericks may write about the rich and powerful, but the moral core of her mystery lies with the people of the “downstairs”. Their lives, thanks to the historical context in which Fredericks situates them, will change as social, economic, and political tides sweep over early twentieth century New York.

Fredericks has penned a novel as richly conceived historically as it is domestically. When it opens, the papers are crying the news of the Titanic‘s sinking. On the domestic front, Jane is preparing a trip to the Long Island home of the Tylers, as her mistress, Louise Benchley, prepares to marry their nephew, William. Charles, William’s uncle, is the powerful, influential, and famous-for-fighting-the-emerging-Italian-NY mafia, police commissioner. But, who is the “new American” and how and why does she die?
END_OF_DOCUMENT_TOKEN_TO_BE_REPLACED 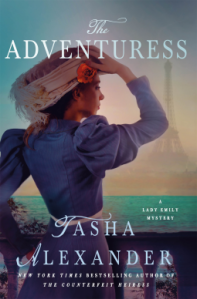