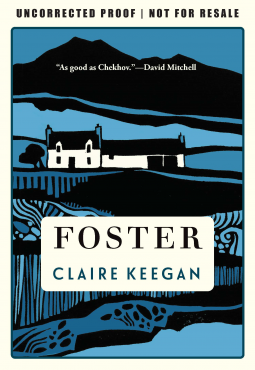 One of the best books I read in the past few years was Patrick Radden Keefe’s Say Nothing: A True Story of Murder and Memory in Northern Ireland. Nothing in Keegan’s “Foster” connects the two except time, “The Troubles”, and loosely, place, given Radden Keefe’s is set in Northern Ireland and Keegan’s Ireland “proper”. One small detail tethered the story to Say Nothing: one character, a wife, tells her husband one of the strikers died and the reader immediately realizes it’s Bobby Sands, which factors in Keefe’s narrative and lets us glimpse the historical tragedy to Keegan’s domestic one.

“I am in a spot where I can neither be what I always am nor turn into what I could be.”

Keefe’s book is sweeping, broadly and lengthily developped, and Keegan’s is short, barely encompassing the space of a summer, but what links them is a theme of loss. Keefe writes about what it means to die for a cause and never question its rightness and Keegan writes about children, where they are valued and where they are not, how one can be an unbearable loss and another, an unwanted burden. So that “Bobby Sands” moment in Keegan encompasses grief and loss in that act, not of the actor, but of those who had to live with the act. I’ve now gone ’round and ’round and have yet to offer details of  what “Foster” is about; in the publisher’s nutshell, please:

It is a hot summer in rural Ireland. A child is taken by her father to live with relatives on a farm, not knowing when or if she will be brought home again. In the Kinsellas’ house, she finds an affection and warmth she has not known and slowly, in their care, begins to blossom. But there is something unspoken in this new household—where everything is so well tended to—and this summer must soon come to an end. END_OF_DOCUMENT_TOKEN_TO_BE_REPLACED