Ambitious, sly, and lethally intelligent, Gideon Hawthorne has spent his life clawing his way up from the gutter. For the last ten years, he’s acted as the Duke of Windemere’s fixer, performing the most dangerous tasks without question. Now Gideon’s ready to quit the duke’s service and work solely for himself. But Windermere wants Gideon to complete one last task, and his reward is impossible to resist: Messalina Greycourt’s hand in marriage. Witty, vivacious Messalina Greycourt has her pick of suitors. When Windermere summons Messalina to inform his niece that she must marry Mr. Hawthorne, she is appalled. But she’s surprised when Gideon offers her a compromise: as long as she plays the complacent wife, he promises to leave her alone until she asks for his touch. Since Messalina is confident that she’ll never ask Gideon for anything, she readily agrees. However, the more time she spends with Gideon, the harder it is to stay away.    END_OF_DOCUMENT_TOKEN_TO_BE_REPLACED 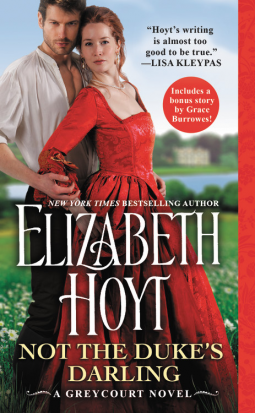 Ah, Hoyt, who’s written some of my favourite historical romances, The Leopard Prince and Duke Of Sin. Therefore, a new Hoyt series is always welcome and I happily plunged into Not the Duke’s Darling as my first 2019 romance-read. Though it didn’t reach the heights of my favourites, difficult to do given how much I love them, it was satisfying. In particular, the storylines and premise it sets up make me eager for the books-to-come.

Not the Duke’s Darling is Georgian-set, Hoyt’s time setting of choice, and centres around reunited childhood friends and former-best-friend’s-younger-sister hero and heroine, Christopher Renshaw, Duke of Harlowe and Freya Stewart de Moray. The opening scene was thrilling, funny, and compelling. Freya is a member of a ancient, secret society, the “Wise Women”, a group of proto-feminists sworn to help and protect women, persecuted as witches and now living in seclusion in an isolated part of Scotland. Freya, however, is one of their agents, living pseudonymously in society, aiding women, and keeping her ears and eyes alert to threats to the group. In the opening scene, Freya is helping a baby-lordling and his widowed mother escape the clutches of an evil uncle, intent on using the infant-lord to control his estates. END_OF_DOCUMENT_TOKEN_TO_BE_REPLACED 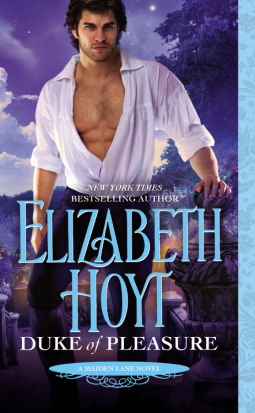 Without a doubt, Elizabeth Hoyt’s Duke Of Sin was one of the best romances Miss Bates ever read. It was natural, therefore, that she greatly look forward to Duke Of Pleasure, Hoyt’s 11th Maiden Lane novel. She had a glimpse of its hero, Hugh Fitzroy, Duke of Kyle, as probity to Valentine Napier’s debauchery in Duke Of Sin. Therein and as Duke Of Pleasure opens, Hugh Fitzroy has been pursuing the Lords of Chaos, a group of immoral, aristocratics who use and abuse children and women. With Valentine’s semi-taming by his house-keeper-heroine, Bridget Crumb, Hugh finds himself relying on Valentine’s Constaninopolean correspondence to help him identify and eventually destroy the Lords. Late one night, he is beset and hurt by a hired group of thugs near the notorious St. Giles area of London. The night-bound Ghost of St. Giles rescues him, the boy who doubles as the information-gathering daylight guttersnipe, Alf. When Alf, at the end of their encounter, boldly kisses Hugh, he realizes that the guttersnipe “from the dung head that was St. Giles” is a guttersnipette! Hugh brings Alf to his ducal abode to help him pursue the Lords. What Alf finds in Hugh is an emotionally closed off widower with two troubled young sons , still mourning the mere months-old loss of their mother and Hugh’s estranged wife, Katherine. At 21, Alf herself feels a certain restlessness with her life, wondering what it would be like to live as a woman, have children, and how to react to the strange heart-and-body-stirrings Hugh elicits in her.   END_OF_DOCUMENT_TOKEN_TO_BE_REPLACED

One of Miss Bates’s favourite romance tropes is the villain’s redemption, the character who serves as the foil and nasty in previous books FINALLY! gets his story, or enters a rom nasty as death and emerges a poignant hero. Miss Bates counts some of her favourite romances among these tropishly-delicious rom-narratives, especially Kleypas’s The Devil In Winter and, oh my goodness such goodness, Georgette Heyer’s first two Alastair trilogy books, These Old Shades and Devil’s Cub. Elizabeth Hoyt’s tenth Maiden Lane novel, Duke Of Sin, has a villain-hero who combines the qualities of Sebastian, Lord St. Vincent; Justin Alastair, Duke of Avon; and, his son, the Marquis of Vidal. Valentine Napier, Duke of Montgomery is “the most wicked man in London … as deadly as a coiled adder.” He’s beautiful, decadent, a blackmailer and murderer and, though exiled, he’s back and ready to restore his rightful place in society by all unsavory means. But into his blackened heart and hollow soul crawls a little avenging angel of a housekeeper, Bridget Crumb.
END_OF_DOCUMENT_TOKEN_TO_BE_REPLACED

Elizabeth Hoyt: Miss Bates just can’t quit you. Thus Miss B. found herself reading Hoyt’s, yes, ninth Georgian-set, Maiden-Lane novel, Sweetest Scoundrel. And what a scoundrel Asa Makepeace was, paired with a plain-Jane heroine, his “harpy,” as he called her, Eve Dinwoody, sister to Valentine Napier, Duke of Montgomery (the previous novel‘s villain). As the old duke’s illegitimate daughter, Eve lives an introvert’s ideal life: Val provides her with a lovely home and servants, ample income to indulge her miniature painting hobby, keep her caged dove in fancy seeds, and a bodyguard, a great character in and of himself, Jean-Marie Pépin. Eve is the only person who genuinely loves her nefarious brother. Responsible for Val’s interests in his absence (his shenanigans sent him into “exile” on the continent), she ensures his investment in Asa Makepeace’s grand rebuilding project, the pleasure garden known as Harte’s Folly, is solid. Officious, book-keeping, and dignified Eve meets volatile, foul-mouthed, and crude “Mr. Harte”, Asa, when she confronts him about his cavalier spending of her brother’s money and then goes about controlling Asa’s purse-strings.
END_OF_DOCUMENT_TOKEN_TO_BE_REPLACED

The Raven Prince and The Leopard Prince, especially the latter, are two of the best romance novels Miss Bates has read. With what enthusiasm Miss Bates delved into another Hoyt Georgian romance in Dearest Rogue. Eighth in the Maiden Lane series, Dearest Rogue, like the sublime, early Leopard Prince, is a cross-class romance. It opens on Bond Street, where bodyguard James Trevillion, formerly a captain in his majesty’s dragoons, saves his charge, Lady Phoebe Batten, from kidnapping. It’s obvious that James is sweet on Phoebe, but there be complications. Phoebe, sister to the powerful Duke of Wakefield, is blind and needs James’ protection from would-be kidnappers and to ensure her safety as she navigates city and society. (She is an innocent 21 to his jaded 33, so there’s a May/December trope as well.) Phoebe resents James’ close watch over her and her brother’s over-protectiveness. She imagines James dour and old, at least until Artemis, her sister-in-law, tells her he’s young, blue-eyed, and handsome. James, in turn, thinks he’s too old, too poor, too lame (he sustained an injury in the course of his dragoon duties) and too humble-in-origins to be anything but an annoyance to Lady Phoebe. Phoebe and James’ journey to love, friendship, and desire, while fighting kidnappers, Wakefield’s loving, controlling solicitude, and confronting James’ fraught family history, is told with Hoyt’s elegant prose and delightful humour. END_OF_DOCUMENT_TOKEN_TO_BE_REPLACED

Elizabeth Hoyt’s The Raven Prince hasn’t been around long enough to be “classic romance,” but give it another ten years and it will be. Miss Bates is jumping the gun, but she’ll stick by this claim. Hoyt’s been in Miss Bates’s “get-to” pile of romance novels for a long time. Silly spinster should have read them ages ago because, if The Raven Prince is typical of Hoyt’s writing, she missed out. She now says with confidence that the reading of The Raven Prince is “the beginning of a beautiful friendship.” This is as wonderful a romance novel as one can get and especially so because it plays with references to Miss Bates’s most beloved romance, Jane Eyre. END_OF_DOCUMENT_TOKEN_TO_BE_REPLACED