Dear friends and readers, another year with Miss Bates in the waning light of blogs everywhere. Romance review blogging has given way to Twitter, #bookstagram, etc. and you can find me there, as well as Goodreads and Netgalley, if that’s where you get your reviews. The new and shiny is always a temptation, but I happen to think that the best engagement for reading books is writing about them. So I shall continue to do so. Thank you for reading, commenting, and plain old sticking by me and whatever idiosyncratic reading thoughts and opinions I throw your way. I wish you and yours a happy, healthy, prosperous, inspired and inspiring 2019 and oodles of wonderful books.

I had a great reading year, exceeding my Goodreads goal of a hundred books. I enjoyed many romance novels this year and expanded my non-fiction reading to balance out the HEAs. Below are the best books I read in 2018. I started this post on the first of 2018 and it blossomed with many-a-title till December 31st. It originally had over 30 “favourite” titles. My criteria for the final twelve that follow was simple: if I could vividly remember scenes, ideas, characters, or atmosphere, then it merited inclusion. If the book was “great” at the time of reading but faded over time, well then, it was excised. I hope to articulate, with a few lines for each, what stayed, lingered, and impressed me … strictly from memory, so these will be, at best, impressionistic “reviews”. END_OF_DOCUMENT_TOKEN_TO_BE_REPLACED

Emma Barry and Genevieve Turner write one of my favourite historical romance series and Free Fall is their fifth story in it. I love that it’s set in the 1960s, a decade I was born into, but don’t remember much of … other than a vague black-and-white memory of MamaB, in bouffant hair, sitting on the coffee table, smoking, and weeping over Bobby Kennedy’s assassination flickering on our tiny, bunny-eared TV. Barry and Turner’s series avoids America’s many ’60s tragedies and focusses instead on the American race to space. Their novels are peopled with astronauts, space scientists and engineers, and Jello-mold-making wives. There is one marvelous female engineer heroine and her grumpy second, Parsons, the scowling engineer who makes an appearance in this present volume. To us, living in these bizarre times, and without the ’60s’ take-to-the-streets ethos, Barry and Turner give their novels a setting that feels like a more innocent, less fraught one. Yet, just around the corner are the women’s movement that will change the genre and us forever and the loss of whatever hope and possibility our American neighbours wrought in Camelot. What I really liked about Free Fall, by way of introduction, is how it’s a domestic novel and more focussed on the heroine’s growth. Vivian Grace “Vivy” Muller is loud, brash, colourful, big in every way, physically, in her laugh, walk, and taste for “bouffant hair” and “winged eyeliner”: “She laughed too loudly, and she did more than wink at boys, and she was always losing her gloves.”   END_OF_DOCUMENT_TOKEN_TO_BE_REPLACED 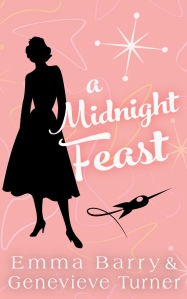 If there’s one underused trope Miss Bates loves, it’s marriage-in-trouble, which is why she pounced on Barry and Turner’s novella-ish, category-length A Midnight Feast. It centres on the leader and doyenne of the space-race, 1960s-set American astronaut world that makes up Barry and Turner’s Fly Me To the Moon series, Colonel Mitch Dunsford and his wife of twenty-years-and-six-kids, Margie.

Barry-Turner have produced an adept narrative: alternating, especially in the first half, between Mitch and Margie’s present estrangement, set in 1965 Houston, and their courtship, young marriage, and flat middle years of care and children on her part and demanding, exhilarating career-making on his. Barry-Turner adroitly portray a marriage void of friendship, connection, and mutual desire, interspersed with chapters that chronologically fill in the intervening years, starting with a heady, whirlwind courtship set in 1945. In that sense, Barry-Turner tell a whole lot of story with a circumspect page-count; yet, their carefully-crafted snapshots of love, lust, affection to benign neglect and cutting indifference still allow the reader to get to know and possibly like their hero and heroine. The narrative is also beautifully bound together with a holiday sequence: starting with a make-it-or-break-it Thanksgiving for Mitch and Margie’s troubled marriage to a lovely Valentine-Day’s-1966-set epilogue.    END_OF_DOCUMENT_TOKEN_TO_BE_REPLACED

Miss Bates loved Emma Barry’s The Easy Part trilogy of political romances. Its trio of committed, intelligent, patriotic couples can serve as an antidote to the awfulness of the present election campaign. If you haven’t, you should read it. Though Barry was tried and true for Miss Bates, she had doubts about Barry’s dual writing effort with Gen Turner. Miss B’s wariness was dispelled with the first title in the Fly Me To the Moon series, Star Dust. Earth Bound‘s hero featured there as the shouting, unsmiling, mean engineer Eugene Parsons. Neither Parsons nor his heroine Dr. Charlie Eason are sunshine and light. Parsons hires Charlie as part of the team trying to beat the Soviets to the moon in 1960s America. As a woman in a man’s world, Barry-Turner make real the viscerally painful experience of being dismissed and overlooked even when you’re the smartest person in the room. Miss Bates felt Charlie’s anger and frustration as she would were she right there being smart and ignored. MissB burned up for Charlie on so many occasions while reading Earth Bound. Navigating the male world while playing the beautiful woman card and hiding your intellectual light is all too familiar to women. Except for demanding, insufferable Eugene, with whom Charlie embarks on an illicit and seemingly sordid, anonymous affair. Only to the hypocrites. Charlie and Eugene may at first only give and take bodily pleasure, but the heart and head of two compatible, beautiful loner-outsiders will have their way.
END_OF_DOCUMENT_TOKEN_TO_BE_REPLACED

Miss Bates is fascinated by romance writers’ use of gesture and body language in establishing character. She wrote about her preoccupation in an analysis of Heyer’s Devil’s Cub and cemented her heroine-chin obsession in her quasi-review of Lynne Graham’s The Greek’s Chosen Wife. Since then, ne’er a romance novel goes by without Miss Bates noting the romance writer’s iterations of the heroine’s lifted chin in fury, defiance, revolt, or mulishness. She indulges in a post about some of the chins she’s read in the past few months. Hope you enjoy it! END_OF_DOCUMENT_TOKEN_TO_BE_REPLACED

Miss Bates isn’t keen on films, or novels set in the early 1960s. She doesn’t like the bouffant dos, or sprawling skirts. For some – ahem, white males – Americans, however, it was an exciting, vibrant time and remains an unexplored setting for romance. It’s fitting that Emma Barry and Genevieve Turner’s collaboration, Star Dust (first in the “Fly Me To the Moon” series) is set during America’s “space race” with the Soviet Union. Uncharted territory then, and uncharted setting in romance. Barry and Turner’s Texas-set romance features Lieutenant Commander Christoper “Kit” Campbell, a blond, blue-eyed giant of an astronaut and Anne-Marie Smith, a diminutive divorcée and mother of two adorable children. They meet as bickering neighbours when Anne-Marie, Lisa, and Freddie move next door to Kit. Anne-Marie and Kit become friends over back-porch star-gazing, add benefits to friendship, fall in love, and achieve an HEA.
END_OF_DOCUMENT_TOKEN_TO_BE_REPLACED

Miss Bates’ latest read is Genevieve Turner’s second “Las Morenas” late-nineteenth-century romance, Autumn Sage. Miss Bates has enjoyed this series’ sweep: California-set, intertwined Anglo and old stock Spanish families, tales tragic and comedic, characters sympathetic and antipathetic, violent pasts, present trials, and in their midst, love, forgiveness, and forging a new family and better way of being in the world. She reviewed the first book, Summer Chaparral; the eldest Moreno sister and family beauty, Catarina, is the heroine. She enters into a shotgun marriage with newly-arrived rancher, Jace Merrill. Autumn Sage is second-sister Isabel Moreno’s story; in Summer Chaparral, we learn Isabel was attacked while riding with her fiancé, Sheriff Joaquin Obregon. When Autumn Sage opens, her engagement is over; Joaquin is an invalid in the sanatorium; and, she suffers from PTSD. Isabel and Joaquin were ambushed by villain outlaw and rich-daddy’s-bad-boy-son, Cole McCade. Enter hero U. S. Marshal Sebastian Spencer, summoned from LA to Cabrillo by Jace, whose estranged father, Judge Bannister, is Sebastian’s superior. Big, black-clad, and austere Sebastian, appropriately named after the tree-bound, arrow-tormented early Christian saint, protects Isabel and captures McCade. Isabel travels to Los Angeles to testify at McCade’s trial. The silent, controlled, still-waters-run-deep Sebastian is reunited with schoolmarm and temperance-society advocate, broken-but-not-down, Isabel. McCade’s guilty conviction proves elusive. While they work to bring him to justice, Sebastian and Isabel fight their own and families’ demons, while their need, desire, and fierce love for each other are as lovely and wild as autumn sage. END_OF_DOCUMENT_TOKEN_TO_BE_REPLACED

The chaparral reaches out to him, as do Catarina’s comely curves and cinnamon eyes. Though Jace carries the secret of his family’s power and hatred of Hispanics, though he doesn’t carry their name Bannister, having run away at fifteen, he yearns for connection and family. A meeting by the town trough and some stolen kisses establish his and Catarina’s attraction. He knows that the Bannisters and Morenos have ancient and nasty history. Animosity, family feud, and blood honour mix with desire, attraction, passion, and yearning for a place in the world: Jace for home and wife; Catarina, now 26, for a husband, home of her own, and freedom from her mother’s austere dominance. END_OF_DOCUMENT_TOKEN_TO_BE_REPLACED