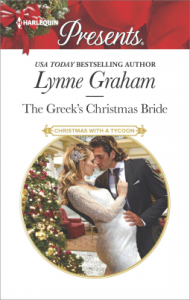 It’s been said ad infinitum that the HP is rom at its most elemental, most “ur”, most wild-fantasy implausibility. Rom-readers who love their crazysauce HP tolerate, excuse, overlook, and forgive many elements they excoriate in other rom: slut-shaming, evil step-mothers, “other women,” whose shenanigans make Lucrezia Borgia demure and modest. To say nothing of the alpha-heroes: they can stomp, dominate, and toss the heroine over their shoulder, pound their chest and be possessive and jealous and paternalistically over-protective. The reader, in the meanwhile, like MissB. sits blithely sipping tea, nodding, smiling, and reading into the wee hours (only the HP has the ability to deprive Miss B. of her love of a good night’s sleep). The reason for this, dear reader?: the HP’s capacity for emotional pay-off. And no one, no one, does it better than Lynne Graham. Miss Bates tapped the last period on her Kate Noble review when she read the first few pages of Graham’s The Greek’s Christmas Bride; a mere 24 hours later, here we are. Like Miss Bates’s favourite Graham, The Greek’s Chosen Bride, The Greek’s Christmas Bride has a moral-core, forge-ahead-with-independence, poverty-stricken, humble heroine, a successful bazillionaire arrogant “man whore” hero with a secret heart of gold, and a dog, in this case, a traumatized terrier named Hector. Like Chosen Bride, Christmas Bride sees the matrimonially-averse hero have to marry and procreate to ensure control of his inheritance. To do so, he takes advantage of a poor heroine who’ll do anything to protect the well-being of the most vulnerable of her family and/or acquaintance.
END_OF_DOCUMENT_TOKEN_TO_BE_REPLACED