The Christian edict that “the last shall be first” comes true in many a Neels romance. Such is The Hasty Marriage (1977). The waif. The mouse. The mousy-haired. The too-small, too-plump, too-plain heroine. And, horrors, on the shelf too. Pushing thirsty. An *gasp* old-maid-in-the-making. The heroine who declares her un-attractiveness on every page. Is there a more self-deprecating one than The Hasty Marriage‘s Laura (do we ever learn her last name?).

A ward sister at St. Anne’s in London, she comes home to visit her father and finds her Dutch godfather with his colleague, Dr. Reilof van Meerum. Drama ensues, as we learn from the blurb:

Laura had always been used to taking second place to her pretty younger sister, Joyce. If Joyce wanted something, she got it! It was, therefore, no surprise to Laura that when she fell in love with the attractive Dutch doctor Reilof van Meerum, he chose Joyce instead. But when Joyce walked out on him to marry another, richer man, Reilof asked her to marry him. He needed a wife, and Laura, it seemed, would do as well as anyone. So she accepted–but could she really expect to be happy with a man who did not love her?

For the most part, and thank the good Neelsian gods, Joyce is absent from the narrative. When she appears, at the start to lure Reilof and at the end to put a canker in the rose of Laura’s marriage (stilted and unconsummated as it is, it’s hers and she loves Reilof enough to be willing to live with this compromise). END_OF_DOCUMENT_TOKEN_TO_BE_REPLACED 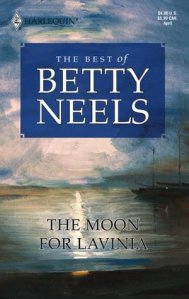 The Moon For Lavinia is wonderful, one for the keeper shelves, to be savoured and reread. It’s standard Betty fare: Nurse Lavinia Hawkins takes a nursing job in Holland in the hopes of greater funds to allow her to bring her long-suffering baby sister, in the hands of a nasty aunt, to live with her. Soon after she arrives and settles into her work, Professor Radmer ter Bavinck, large, solid, blond, attractive, possessed of medical fame and independent fortune, proposes a marriage-of-convenience, seeking a mother for his fourteen-year-old daughter. He’s kind, gentle, and removed, but Lavinia likes him; though she yearns to be loved, Lavinia knows her plain looks and ordinariness will not see her with a better “offer”. She accepts, knowing this will let her bring her sister, Peta, to join them in Holland.
END_OF_DOCUMENT_TOKEN_TO_BE_REPLACED

After the magnificence of Henrietta’s Own Castle (the cat alone sent me into paroxysms of reader-joy … Henry in his tea cosy), I was ready for a gentler, quieter Neels and found it in A Star Looks Down. It’s so quiet and gentle, there’s an absence of OW (Other Woman, for those not used to rom-lingo) and the villain is a hardly-villainous ten-year-old. But there is really something quite lovely about the story of heroine Beth Partridge of the plain face and violet eyes and the laconically mild-mannered, patient Dr. Alexander van Zeust. Indeed, if there’s a nasty, it’s Beth’s brother, who takes advantage of her good nature, impeccable house-keeping, generous heart and hand, as he’s constantly asking for a fiver. He’s in medical training and Beth is paying his and her way on her nurse’s pay. But a generous offer comes from Alexander, who recognizes Beth’s nursing and personal worth and offers her a great sum to nurse his sister while she recuperates from an appendectomy and to care for her four young ones (while their father is away).  END_OF_DOCUMENT_TOKEN_TO_BE_REPLACED 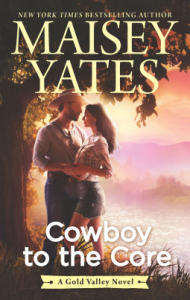 To date, there are 19 Copper Ridge romances and this, Cowboy To the Core, sixth in the complementary Gold Valley series. And here I am, having stayed up late to inhale yet another Maisey Yates romance. You’d think, after 25 of an author’s works, I’d be ready to roll my eyes and thrown in the reader bookmark. Nope. If you asked me which are my favourites so far (’cause I know you’re aching to read these, but may not be willing to tackle all 25), I’d say Brokedown Cowboy (Copper Ridge #2), One Night Charmer (Copper Ridge #7), Seduce Me, Cowboy (Copper Ridge #12), and A Tall, Dark Cowboy Christmas (Gold Valley #4) are top-notch, but I’ve enjoyed each and every one. (Any Copper Ridge/Gold Valley may be read as a standalone, but there are cameos of happy couples from previous books. So you’ve been warned.)
END_OF_DOCUMENT_TOKEN_TO_BE_REPLACED

My dear friend “Shallow Reader,” loves Dani Collins and that’s rec enough for me. After the intensity of Griffiths’s Stranger Diaries and especially its Victorian-gothic length, I was happy to read a snappy category romance. Snap it did, Ms Collins’s Innocent’s Nine-Month Scandal, with my favourite kind of HP heroine, kind, generous, plain-Jane, funny, and a deliciously broody hero, not too annoyingly domineering, but definitely in the strong, caretaker arena.

Collins’s plot was HP-fare ludicrous. Rozalia Toth is in Budapest looking to find the mate to her grandmother’s earring, given to grammy, in troth, by her true-love during what may be (Collins doesn’t make this explicit) the uprising of ’56? Sadly, gram’s true-love succumbed in the riots and she travelled to America, pregnant and destitute, where she made a marriage-of-convenience with one Benedick Barsi. As grammy is now getting on, Rozalia wants to give her the chance to see the earrings as a pair. Many convoluted family connections are discussed between hero and heroine, but I admit I didn’t give them much attention. Plot isn’t why one reads an HP. END_OF_DOCUMENT_TOKEN_TO_BE_REPLACED 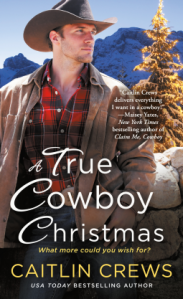 Caitlin Crews’s A True Cowboy Christmas is one of the most convincing contemporary marriage-of-convenience romances I’ve read … and so many other things. It opens with the hero’s father’s funeral. Gray Everett, however, is not mourning his father, but afraid of ending up like him. Gray introduces us to the family with: “Everetts historically lived mean and more than a little feral … tended to nurse the bottle or wield their piety like a weapon, spending their days alone and angry.” Gray’s Colorado ranch, Cold River Ranch, has never been a happy home. His father, a mean, violent drunk; his cheating wife, dead for ten years in a car crash; Gray works the land, cattle, and horses, keeps the bank at bay, and rears his teen daughter, Becca. Back at the ranch, at the post-funeral luncheon, where neighbours and friends have gathered to pay their respects and many to breathe a sigh of relief that Amos Everett’s meanness will no longer touch anyone, Gray realizes that ” … if he didn’t change”, “today’s grumpy hermit” would become “tomorrow’s bitter, old man.” He resolves, there and then, in sight of the funeral-baked casseroles, that he “was going to have to figure out a way to live this life without drowning in his own darkness” and “to make sure that Becca didn’t succumb to it either.” Gray looks up from his thoughts to heroine and neighbour-spinster Abby Douglas’s question, should she warm up a casserole?  END_OF_DOCUMENT_TOKEN_TO_BE_REPLACED

Readers familiar with MBRR will know I am interested in romance’s dark moment, which I define as a betrayal. The darker and more heinous the betrayal, the better executed the narrative tension, when it seems as if hero and heroine will never mend their rift. In Linden’s latest, An Earl Like You (second in the series The Wagers of Sin), this new-to-me author deftly creates a romance which sustains the coming betrayal from the first chapter to the final. I was coiled with tension from the get-go which I attribute to Linden’s premise. Upon his father’s death, Hugh Deveraux, 7th Earl of Hastings, learns that the 6th earl’s profligate ways left their family destitute: estates given to gardens and follies rather than tenants, debts galore, two sisters dowry-less and a mother grieving; the Deveraux women are ignorant of their new circumstances … and Hugh wants to keep it that way. What’s a peer to do but take to the gambling tables in a desperate attempt to ensure his mother’s well-being and sisters’ future? Until Hugh loses and is faced with a devil’s bargain from a wealthy speculator, Edward Cross, looking to ensure his daughter’s future. Cross asks Hugh to meet him at his palatial Greenwich home, tells him he now holds his debts and will call them in …  unless Hugh woos and wins Cross’s plain, spinster daughter, Eliza.
END_OF_DOCUMENT_TOKEN_TO_BE_REPLACED

A groggy, caffeine-heavy morning for me after a night reading into the wee hours, thanks to Lauren Willig’s Gothic romance, historical mystery The English Wife. The novel opens in January 1899 in Cold Spring NY, at “Illyria,” Bay and Annabelle Van Duyvil’s country estate. Bay and Annabelle’s hermetic existence has thus far been the bane of Bay’s appearances-are-all mother, Alva. Formidable, humorless Alva is ever flanked by Janie, her mousy, silent daughter and Anne, the mouthy, flamboyant niece she took in. To Alva’s great society-loving heart, Bay and Annabelle are finally celebrating the opening of their magnificent estate by holding a costume ball for New York’s best, brightest, and finest. Until now, Bay and Annabelle’s life has been a mystery. Rumours of eccentricities and infidelities swirl around them, about them … maybe because they keep to themselves and, at least on the surface, appear to live an idyllic existence with twins Sebastian and Viola. Bay and Annabelle don’t seem to give a fig about what the “best people” think, rendering them endlessly fascinating to the society pages and ensuring Alva Van Duyvil’s frustrated, officious meddling. END_OF_DOCUMENT_TOKEN_TO_BE_REPLACED

It’s rare that Miss B. reacts to a romance (maybe because her choices tend to the tried and true these days) as she did to Amy Sandas’s The Untouchable Earl. About half way through, she wanted to DNF. But there was a sense of purpose and theme to it that said, “No, no, keep reading.” So, she did. And now that it’s done, she doesn’t quite know what to say about it. At its heart is a sexual healing theme that Miss B. despises, akin to her curled-lip reaction to Lisa Valdez’s Passion, possibly rivaling Old Skool romance to be the worst romance novel ever written. And yet, she also can’t dismiss The Untouchable Earl the way she can Passion. Its premise is the stuff of high eye-rolling melodrama. Melodramatic circumstances conspire to bring Plain-Jane husband-seeking ton debutante Lily Chadwick, kidnapped and drugged, up for auction at Madame Pendragon’s, a brothel. It’s all pretty sordid and awful until the eponymous Earl, a hero with possibly the most ridiculous name in romance, Avenell Harte (with, yes, the obvious pun there) purchases Lily and her intact maidenhead. As far as maidenheads go, hers isn’t half as impressive as Passion’s, but still. It doesn’t look like her maidenhead’s in any danger when we find out that Avenell (she’s strictly forbidden from saying his name and when you consider how lame it is, you can understand the guy’s reluctance) … well, he’s functional and all, but he can’t bear to be touched.
END_OF_DOCUMENT_TOKEN_TO_BE_REPLACED 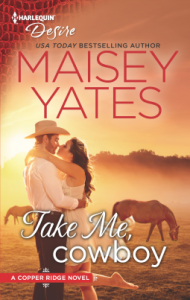 Miss Bates has never NOT had a book on the go; once she finishes one, she has the next lined up. Sometimes, new-book-starting is a desultory affair: tepid, reluctant, maybe even a tad depressing. “Will this satisfy my reading-pleasure-principle?” “I have limited reading time, will this be worth the precious half hour I have nightly?” MissB started reading Maisey Yates’s Take Me, Cowboy in this mode: half-heartedly, maybe even sullenly. But she’d loved so many Yates-romances and went into that good-reading-night anyway. Yates’s Oregon-set Copper Ridge series has had one winner after another, would Take Me, Cowboy exhibit series-exhaustion?

Certainly the romance’s opening had Miss B. scowling: wait a minute, this sounds awfully like the last Yates Miss B. read: Bad News Cowboy, with its plain-Jane, best-bud heroine and looker-womanizer hero who find themselves on friendship’s wrong side, as lovers, prey to powerful desires and frightening feelings.
END_OF_DOCUMENT_TOKEN_TO_BE_REPLACED