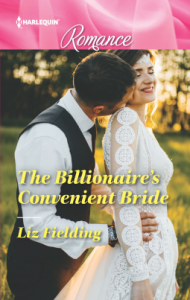 After Kingston’s intense, lengthy Desire Lines, I needed a romance palate cleanser and Liz Fielding’s signature gently-created world was the perfect choice. Though I fulfilled my wish for bluebell gardens, charmingly crumbling castles, and cute dogs, Fielding’s The Billionaire’s Convenient Bride also delivered an emotional punch. An ominous note rang from scene one. Kam Faulkner arrives at Priddy Castle with humiliating memories and a desire for revenge against heroine Agnès Prideaux. Agnès and Kam had grown up together, running wild and free on castle grounds and surrounding land and water. Later, as teens, their childhood bond was complicated by physical attraction. But the cook’s son and castle “princess” was a love that could not be; when Agnès’s grandfather caught wind of it, he fired Kam’s mother, winning Kam’s resentment and hatred. Kam and his mother had to leave their sole home and income source. In the intervening years, Kam worked hard and achieved huge financial success. END_OF_DOCUMENT_TOKEN_TO_BE_REPLACED