We can add Jackie Ashenden to the queendom of the small-town contemporary romance duo of Maisey Yates and Caitlin Crews/Megan Crane to make a triumvirate. Which means you get more of the same if you’re a fan of Yates, or Crews-Crane. I’m not a fan anymore. I’m tired of the formula: former military heroes are now suspect, small-towns are scary “off the grid” loony-territory, and tough-talking heroines hiding lonely vulnerabilities aren’t quite believable when “they doth protest too much”. If these characters turn your crank, then you’re the reader for Ashenden’s first “Deep River, Alaska” romance, Home to Deep River.

Ashenden establishes her series setting with a romance that sees hero Silas Quinn return home when his best friend, RIP Caleb West, the town owner, bequeaths him, well, the town. It’s been thirteen years of bad memories of Deep River, except for Silas’s love for Hope Dawson:

Deep River, Alaska, boasts a fiercely independent though small population. The people who live here love it, and they don’t much care what anyone else thinks. Until the day Silas Quinn comes back and tells them an oil reserve has been found below the town and now it’s neighbor vs. neighbor. Some want to take the money and run, while others want to tell the oil company to put its rigs where the sun don’t shine.

Hope Dawson never expected to leave Deep River. Her mom needs her. Her grandfather died and left her the local hangout to run. Her dreams of college and adventure died long ago. Until Silas comes back to town, holding the key to set her free. But freedom means she loses him again, and he’s the one she’s really always wanted.

As a matter of fact, no oil company shows up, there’s no neighbour vs. neighbour and the oil reserve is a minor plot point in this day and age of climate change and alternative energy to bring Silas and Hope together. Does it matter? Not really. Because the town shenanigans and oil reserves and what the town will decide are the background to Ashenden’s purpose: her protagonists waffling on about their tormented feelings while having a lot of sex, lotso’ sex and lotso’ internal distress and denial.  END_OF_DOCUMENT_TOKEN_TO_BE_REPLACED 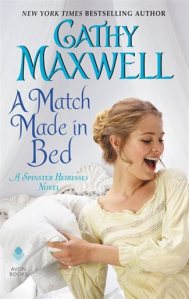 I’d never read a Maxwell romance and embarked on A Match Made In Bed with curiosity and enthusiasm. Because I’m a naïve, gullible reader who’s too easily pleased, I lauded Maxwell to a Twitter friend and smiled smugly to myself on having “discovered” a great, new-to-me historical romance author. Unfortunately, I didn’t end up where I began. A Match Made In Bed showed initial promise. The hero and heroine intrigued me and the narrative promised compelling themes about money, women’s place in society, class, and family dynamics.

Soren York, Lord Dewsberry, and Miss Cassandra Holwell meet at a house party held outside of London. It’s not their first encounter. They share an interesting history: their Cornish-origined families have long feuded over past deception. Soren, aware of Cassandra’s dislike, yet woos her … because he needs an heiress’s money to bolster his soon-to-be-lost estate, Pentreath Castle. The novel opens with great banter and a wonderful antagonistic attraction between Cassandra and Soren. Even though Soren is mercenary, Maxwell manages to show us how he’s also kind and honourable. Cassandra is bookish and intelligent and has a lot of our sympathy, nursing a childhood hurt inflicted, unknowingly mind you, by Soren.
END_OF_DOCUMENT_TOKEN_TO_BE_REPLACED 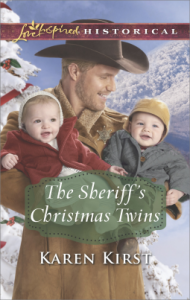 Karen Kirst’s The Sheriff’s Christmas Twins is the ninth romance in her “Smoky Mountain Matches” series and even though after nine volumes Miss Bates would’ve thought the series would feel tired, it’s fresh and lovely. While The Sheriff’s Christmas Twins doesn’t reach Reclaiming His Past‘s greatness, there is much to recommend it. Firstly, a character we’ve followed in many of the previous novels, Sheriff Shane Timmons, protector of Gatlinburg, Tennessee, and its environs, finally gets his story and a heroine worthy of his dour, but committed and decent soul. Shane’s heroine is visiting childhood friend, Allison Ashworth, the now-woman whose father once took in the friendless, homeless, orphaned Shane. Allie and Shane are now in their thirties, but thanks to Shane’s continued correspondence with Allie’s brother George, Shane’s bond to his foster family remains strong. When Allie and George’s father, David, brought the 14-year-old angry Shane to their household, 12-year-old Allie immediately latched onto him, regaling him with love, affection, and gentle good-hearted teasing. She wanted to be his friend, to make him a part of every family holiday and tradition, but Shane held back – especially from her. At George’s insistence, he and his family and Allie travel to Gatlinburg, from their home in Norfolk, Virginia, to spend the holidays with Shane.  END_OF_DOCUMENT_TOKEN_TO_BE_REPLACED

Tiffany Reisz is a new-to-Miss-B author writing in a category Miss B doesn’t usually read. Miss B. likes her candles and avowals of love with only the mildest of love scenes. Harlequin’s soon-to-be-defunct Blaze line is more ero than Miss Bates likes, BUT Reisz is an author Miss Bates wanted to try. However, Miss Bates knew Reisz’s erotica would not have been her cuppa. Miss B. thought the waning Blaze, a category from which she’s only read Sarah Mayberry’s marvellous romances, would be – well, less erotic. And it was: one woman, one man, yes explicit love scenes, but an HEA to end and some tender, falling-in-love moments. Miss B’s experiment didn’t leave her with a desire to snap up every Blaze title out there, but it wasn’t distasteful either … at least not when she started to skim the love scenes. END_OF_DOCUMENT_TOKEN_TO_BE_REPLACED 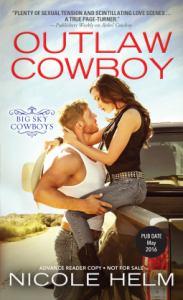 Ever since she was a tween, Miss Bates has loved the film version of Breakfast At Tiffany’s. Miss Bates cannot resist the ethereally beautiful, vulnerable Audrey Hepburn or poignant Golden-Boy George Peppard. What Blake Edwards made of Capote’s novella is pure romance genre. More than anything, Miss Bates loved watching two morally compromised characters find love. They are, of course, morally compromised in their eyes, not the viewers’. Their growing love helps them re-evaluate who they are, see themselves in a better light, and give themselves what they deserve: love and belonging. In Nicole Helm’s Outlaw Cowboy, second in the Big Sky Cowboys series, Miss B. found just that, a viscerally satisfying romance about two people who are hardest on themselves emerging out of their dark nights of solitude to love, connection, family, and hope. Caleb Shaw is Mel Shaw’s brother; Mel is the heroine of Helm’s first romance in the series, Rebel Cowboy. That novel opened with Mel’s struggles to keep the Montana family ranch afloat. Bro’s on the bottle and father, paralyzed in an accident five years ago, has given up, checked out, and broods throughout the family home. When Outlaw Cowboy opens, baby bro Caleb has taken the ranch reins. He stopped drinking and desperately wants to retain ownership of the family land. Caleb is haunted by his mother’s abandonment and one terrible night he almost beat a man to death when he saw him holding a gun to his daughter’s head.
END_OF_DOCUMENT_TOKEN_TO_BE_REPLACED

Miss Bates loves chocolate: she likes it with sea salt; she likes it dark; she likes it Lindt; and, she likes it with almonds too. Laura Florand’s novels are an original bar in contemporary romance: Paris-set in the world of the chocolatiers, hot romance, soft-heart-hard-abs alpha heroes, and heroines who hold their own, asserting their identity and independence before the hero’s uber-protectiveness. With the help of one of the most beautiful cities in the world and best cultivated national palates, Florand builds a unique world in contemporary romance. Her latest, the first in the Paris Hearts series, All For You is a title – in light of the hero’s sacrifices – most fitting. A character’s chocolate palate (in this case, the hero’s) serves as a means of identifying and communicating with him – because he is one hard-headed fella. His love’s honey-hibiscus chocolate creation is her way of saying this-is-me “if anyone knew how to properly taste her.” 😉 The chocolatière, heroine Célie Clément, is chief chocolate-creator for Dominique Richard, hero of The Chocolate Touch; the hero, Josselin “Joss” Castel, five-year veteran of the French Foreign Legion. It was lovely to see Dom with his girlfriend, Jaime, soon to be wife if only he were worthy of being her husband. With this notion enters a major theme in this latest novel: to be worthy of the other, deserving of love and trust, to overcome fears of inferiority and abandonment. So much angst and so much sexy in one succinct chocolate-filled soupçon of a delightful novel. END_OF_DOCUMENT_TOKEN_TO_BE_REPLACED

With the Middle East in conflagration, Miss Bates’s taste for the desert sheikh romance is less and less palatable, requiring a greater and greater suspension of disbelief. If there’s a sheikh romance that engages and convinces, it’d be Maisey Yates’s. (Miss Bates’ loved last year’s Pretender To the Throne, though it was set in a fictional Greek island kingdom. Settings, in the HP romance, are interchangeable. The circum-Mediterranean world suffices, with its images of heat, passion, and enough foreign-ness to satisfy the safe-seeking sensibilities of HP readers.) In To Defy A Sheikh, Yates sets up a fascinating premise: hero and heroine meet after sixteen years under unusual circumstances. The heroine, Samarah Al-Azem, former princess of Jahar, attempts to murder Sheikh Ferran Bashar of Khadra, her childhood playmate. He is the reason for her father’s execution, the father who destroyed Ferran’s family … though, as revealed in the course of the romance, her and Ferran’s family were embroiled in the most sordid of affairs, with infidelity and control and violence as their causes and outcomes. Not all parties were guilty; the ones who were dealt the hardest blows are the innocents, the children, Ferran and Samarah. As adults, Ferran is tormented by guilt and Samarah burns with revenge. END_OF_DOCUMENT_TOKEN_TO_BE_REPLACED