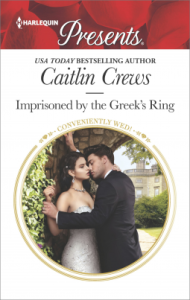 Caitlin Crews’s Imprisoned By the Greek’s Ring is a cautionary tale about revenge, a redemptive story of two broken people learning to love, and a sly meta-romance. It is outlandish, exaggerated, high strung, and over-the-top. Its premise is unlikely; its romance, hyperbolic; its hero and heroine, made of clichés and uberness. In a nutshell, it’s an HP romance and delivered exactly what I sought: an immersive id-reading experience. It is apropos that it kept me up till the wee hours and I crawled into work (looking quite deceptively crisp and business-like, with a string of meetings to plan for and endure) with major bleary-eyed book hangover. (And to whomever left espressos and stickie buns in the common room, you have my eternal gratitude.) Crews is one of the masters of the genre and she drew me in (it took some work) and left me on the bank and shoal of time, happy to have spent a few hours with her visceral characters and plot.  END_OF_DOCUMENT_TOKEN_TO_BE_REPLACED

In keeping with its melodramatic ethos, the HP romance thrives on a good revenge story. Revenge is lurid, dramatic, passionate, and more tangible than hate. Hate is nebulous; revenge is concrete and action-driven. New-to-Miss B. Michelle Smart’s Wedded, Bedded, Betrayed is powered by the hero’s vendetta against the heroine’s family. Gabriele Mantegna served two years in prison to save his innocent father from doing so. When he emerged, his father was dead, mother a ghost of her former self, fiancée a no-show, and business, Mantegna Cars, rudderless. For the next four years, Gabriele pursued “a subtle one-man vendetta against” the Riccis, the family who set up his father to take the fall. One night, seeking incriminating evidence at Ignazio Ricci’s Caribbean island villa, Gabriele rescues a maiden-waif captured by thieves. This woman-sprite is Elena Ricci, Ignazio’s beloved, over-protected daughter. What sweeter revenge than blackmailing his enemy’s precious princess into marrying and bedding him? Otherwise, Gabriele exposes her father’s corruption. When desire and love enter a picture where they had no place, what is a wrong-headed alpha-hero to do but the dumb-ass thing – cling to revenge and vindication. END_OF_DOCUMENT_TOKEN_TO_BE_REPLACED

With the Middle East in conflagration, Miss Bates’s taste for the desert sheikh romance is less and less palatable, requiring a greater and greater suspension of disbelief. If there’s a sheikh romance that engages and convinces, it’d be Maisey Yates’s. (Miss Bates’ loved last year’s Pretender To the Throne, though it was set in a fictional Greek island kingdom. Settings, in the HP romance, are interchangeable. The circum-Mediterranean world suffices, with its images of heat, passion, and enough foreign-ness to satisfy the safe-seeking sensibilities of HP readers.) In To Defy A Sheikh, Yates sets up a fascinating premise: hero and heroine meet after sixteen years under unusual circumstances. The heroine, Samarah Al-Azem, former princess of Jahar, attempts to murder Sheikh Ferran Bashar of Khadra, her childhood playmate. He is the reason for her father’s execution, the father who destroyed Ferran’s family … though, as revealed in the course of the romance, her and Ferran’s family were embroiled in the most sordid of affairs, with infidelity and control and violence as their causes and outcomes. Not all parties were guilty; the ones who were dealt the hardest blows are the innocents, the children, Ferran and Samarah. As adults, Ferran is tormented by guilt and Samarah burns with revenge. END_OF_DOCUMENT_TOKEN_TO_BE_REPLACED