Am going to do my darndest to stick with Wendy’s TBR Challenge this third year of our pandemic. Grateful to Wendy for hosting and, eons ago, launching me on a love of category romance. I am going to use the challenge to get through some of my VAST category romance TBR. If you like, you can check out the other great participating blogs and Wendy’s treasure-trove of reviews at her blog, linked here.

As Wendy quipped, this month’s theme is “quickie,” which I took to mean category-length romance (yay to my category romance reading plans!) rather than, um, a fast-paced amorous encounter. What I pulled from the TBR was one Wendy herself lauded…which is how it ended up in my TBR, Sarah M. Anderson’s The Nanny Plan. I’d read Anderson’s Lawyers in Love series and enjoyed it and this one had a cute baby on the cover, so I was pretty much a goner from its first appearance on Wendy’s blog. END_OF_DOCUMENT_TOKEN_TO_BE_REPLACED

There was much to love about Hoang’s The Heart Principle and not. The blurb has a rom-com vibe and not. Neither com nor angst fit the novel, solid romance for two-thirds and then a long-winded “something else”.

For what it’s worth, here’s the blurb and let’s see where it takes us:

When violinist Anna Sun accidentally achieves career success with a viral YouTube video, she finds herself incapacitated and burned out from her attempts to replicate that moment. And when her longtime boyfriend announces he wants an open relationship before making a final commitment, a hurt and angry Anna decides that if he wants an open relationship, then she does, too. Translation: She’s going to embark on a string of one-night stands. The more unacceptable the men, the better.

That’s where tattooed, motorcycle-riding Quan Diep comes in. Their first attempt at a one-night stand fails, as does their second, and their third, because being with Quan is more than sex—he accepts Anna on an unconditional level that she has just started to understand herself. However, when tragedy strikes Anna’s family she takes on a role that she is ill-suited for, until the burden of expectations threatens to destroy her. Anna and Quan have to fight for their chance at love, but to do that, they also have to fight for themselves. END_OF_DOCUMENT_TOKEN_TO_BE_REPLACED

Three romance novels saw me DNF them because of their opening scene: Mary Balogh’s The Secret Pearl; Susan Elizabeth Phillips’s Nobody’s Baby But Mine; and, Cecilia Grant’s A Lady Awakened. In time, I returned to all three and loved them. We can add a fourth, Lopez’s début, Lush Money. All four open with a scene where one or both of the protagonists are morally comprised; we see the them at their worst. All four involve a scene where the body is exchanged for money, or services, where the “other” is objectified and exploited. It is most interesting that in three of the four, including Lopez’s, the hero is objectified. What Lopez brings to the table is a flip to the classic HP ethos: the billionaire, in this case, the heroine, Roxanne Medina, “buys” Prince Mateo Esperanza’s, the hero’s, services to make her dream baby and cement her business empire. They marry, business-like, and “meet” once a month over a three-day period when Roxanne ovulates. So, what’s in it for Mateo? END_OF_DOCUMENT_TOKEN_TO_BE_REPLACED

Sonali Dev’s Pride, Prejudice, and Other Flavors was everything I wanted in Sharma’s The Takeover Effect. Though it’s distasteful to praise one author at the cost of another, Sharma’s ugh-failure was fresh in my mind as I read Dev’s latest and revelled in it. In all fairness, Dev herself came under my miffed-reader scrutiny as my one foray into her books wasn’t positive. I found The Bollywood Bride overblown, melodramatic, and humorless. Pride, Prejudice, and Other Flavors is none of those things. Dev bleached the Bride‘s flaws and created a novel that is rich in humor, deeply felt, tender, and moving. Moreover, I’m leery of Austen-homages, finding them derivative (I guess they’re meant to be, so schoolmarm picky of me to say so) and never as good as the original. Dev convinced me otherwise. Her Austen-love comes through as sheer delight and joy in the frothy glory that is Pride and Prejudice. But Dev has wrought something uniquely her own: twisting and turning in Austen’s wake, leaping like a joyful dolphin by taking the familiar, beloved Austen tropes and making them hers. This constitutes Dev’s “other flavors”: coming from teasing out of Austen a remarkable POC-hero-heroine, American politics and the “dream”, class struc-and-stric-tures, family dynamics, and Austen-up-ending gender stereotypes, the most brilliant stroke of which is Dev’s rendering of smarmy Wickham.
END_OF_DOCUMENT_TOKEN_TO_BE_REPLACED 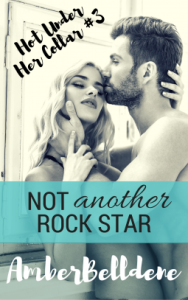 Romance narratives are alien to my personal experience and circumstances and I’m perfectly okay with this. It’s not what I look for in my reading and, as far as I’m concerned, “relatable” has always been a dirty-word. The important thing is that my primary fictive reading is “literarily” familiar to me: in other words, I always read Austen, the Brontës, Mrs. Gaskell, and male authors, for the romance. When I started reading romance, I finally realized what they were missing. They left me hungry for more ‘o’ that; I took my romance where I could find it. Amber Belldene’s Not Another Rock Star added a dimension to romance I’ve never experienced. It felt as close and familiar to my theological viewpoint as a romance novel can get. I say this because what I have to say about Not Another Rock Star will be coloured by that sympathetic prejudice. It isn’t part and parcel of the religious tradition in which I worship, but its theological ethos and romance raison d’être are deeply sympathetic and right. I may have lost perspective, in other words, but take the review as you will, with that in mind.

Let me start off by saying that Belldene, an Episcopal priest herself, does not write what the romance genre defines as inspirational romance. She includes religious and theological content, her heroine is a priest, but Not Another Rock Star doesn’t use a conversion narrative, or posit the idea that evangelical Christianity is the matrix of everyone’s “Come to Jesus” moment. Belldene also includes elements, pun intended, anathema to inspie romance: explicit love scenes of the premarital variety, an atheist hero and remains so, and quite a bit of spirit-imbibing, of the bottled variety. END_OF_DOCUMENT_TOKEN_TO_BE_REPLACED

Miss Bates has enjoyed many a Shalvis romance. In particular, she liked the Animal Magnetism and Lucky Harbor series, but there was something about them that made her abandon them. Miss Bates would say this is because Shalvis tends to start strong and end weak and can’t let a series go after the first successful volumes. Nevertheless, Shalvis’s talent for quick, funny dialogue and smooth prose convinced MissB. to delve into the San Francisco-set Heartbreaker Bay series, of which Accidentally On Purpose is third.

Shalvis’s romances are signature: strong, mouthy heroine meets strong, silent, dominating, domineering alpha hero. Accidentally On Purpose is true to type. Elle Wheaton is independent, successful, and determined to become more so. She is the Pacific Pier Building’s general manager and working toward an accounting degree. She’s blonde, curvy, beautiful and fills out a wrap-around dress and stilettos to make men sigh. Only one man is impervious to her charms: the building security firm head, Archer Hunt. Turns out, however, that Archer and Elle share a past, a past Archer can’t seem to get beyond to the desirable, desiring woman Elle has become. Years ago, desperate sixteen-year-old Elle was caught in a heist, trying to return stolen property to save her sister’s life, and rookie cop Archer rescued her, saving her from the clinker and a life on the streets. Now, Elle’s confidence and success aren’t sufficient to help Archer ever see her as anyone other than the frightened, hungry teen he first encountered. Archer and Elle are friends of a sort, though their exchanges run more to antagonistic than camaraderie. END_OF_DOCUMENT_TOKEN_TO_BE_REPLACED