With romances being the majority of my fictive reading, it’s nice to have an occasional palate cleanser. More often than not, I turn to a cozy mystery to serve as such. Even though G. M. Malliet is a new to me author and I am loathe, being conservative in temperament, to risk the loss of precious reading time to an author who may prove to be unworthy of it, I cannot resist a vicar hero … and, in this case, also former-MI-5. I blame James Norton’s ample charms on Grantchester and my long-running love of Spooks/MI-5 and the feasting of eyes on Matthew Macfadyen, David Oweloyo, Rupert Penry Jones, and Richard Armitage in one glorious long-running series.

Malliet’s vicar-hero is a stunning man unaware of his stunning-ness, which makes him eminently lovable, adorable, and likeable. His occasional partner in crime-solving is his Wiccan wife, Awena, as well as young, intelligent local “copper,” DCI Cotton. They live in a conglomeration of little English towns with variations on the name Monkslip and in his vicar-guise Max is in charge of the souls and bodies of St. Edwold’s Church’s parishioners. END_OF_DOCUMENT_TOKEN_TO_BE_REPLACED 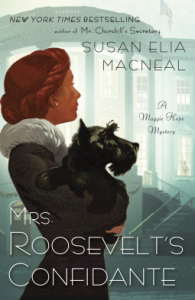 Ever since youthful Miss Bates watched black-and-white film matinées, she’s a sucker for a narrative set in WWII (also, the glorious Band Of Brothers). She watched The Guns Of Navarone sundry times, even Mrs. Miniver, which gets a nod in Susan Elia MacNeal’s Mrs. Roosevelt’s Confidante, fifth in the Maggie Hope series set during WWII. MacNeal’s murder mystery is historically rich, interweaving fictional and non-fictional characters that never feel contrived. The heart of Mrs. Roosevelt’s Confidante is the eponymous heroine, Maggie Hope, ostensibly Prime Minister Winston Churchill’s secretary, actually special ops spy and code-breaker. For the most part, the novel takes place in Washington D.C. during Christmas of ’41 to New Year’s ’42. Maggie and her cohorts, David Greene and John Stirling (former RAF pilot and ex-fiancé) accompany Churchill to his meeting with President Roosevelt. For Maggie, David, and John, this is the culmination of what Churchill and they have been hoping for and planning, an alliance giving Britain the edge to defeat Nazi Germany. However, forces in the U.S. and Europe are operating against them, some of global significance and others of an equally pernicious domestic nature. Maggie is embroiled in the latter when figures, aiming to hurt the liberal president and scuttle his war efforts, frame his wife Eleanor. Blanche Balfour, Mrs. Roosevelt’s secretary, is found dead, an apparent suicide, with a note claiming that Eleanor made amorous advances to her. Should the letter be leaked to the media, repercussions would affect Roosevelt and Churchill’s plans …  END_OF_DOCUMENT_TOKEN_TO_BE_REPLACED