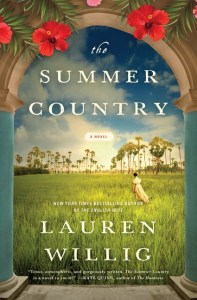 Lauren Willig’s “summer country” is early nineteenth and Victorian-Era-set Barbados. A young women arrives in Bridgetown in February 1854, Miss Emily Dawson, to claim her inheritance, the ruined sugar-producing estate of Peverills, only to discover a family history that alters everything she has known about who she is.

Since the *sniff* end to the Pink Carnation series and we can see vestiges of this theme there too, Willig’s novels centre around a heroine’s journey of unearthing familial and historical identity. Willig’s specializes in, to nay-say the Bard’s Hamlet, a “discovered country” that alters and then cements a new future for our heroine. The Summer Country‘s Emily Dawson is such a heroine, as she delves into the Barbadian history of slavery, white privilege and exploitation of others, and the personal tragedies and triumphs of parallel stories, one set in 1812-1816, and the heroine’s present, 1854, the 1812-16 narrative bearing on Emily’s present and future.

With this in mind and from the perspective of a reader who’s read to the final page, Willig’s early line rings ironic, “Emily wanted to see it all.” As an adventuresome, poor, unassuming spinster character who’s divested of looks and flirtation, Emily can freely take in the atmosphere, characters, history, and landscape of Barbados when she arrives with cousin Adam and best friend, Laura, also Adam’s wife. Adam has inherited their grandfather’s interests and company, while Emily has to decide what to do with Perverills, the legacy her usually business-savvy, tight-fisted grandfather left to her. Will she sell? Most likely, but she wants to explore what led her grandfather to purchase it and, moreover, leave it to her.

The British-borne-and-bred Adam, Laura, and Emily arrive on Barbados’s shores as European ingenues and are soon embroiled in the convoluted relationships of the island’s wealthy whites, newly freed, prosperous former slaves, and its “redlegs,” poor whites once hailing from Ireland and Scotland. Her grandfather, Jonathan Fenty, was one such. As Emily takes in the heat, sounds, strangeness and vibrancy of Barbados, she is brought into the fold of one wealthy sugar estate owner, Mrs. Davenant, and her grandson, George. Emily is also introduced to a wealthy, accomplished former slave family, the Turners, and their aloof nephew, Dr. Nathaniel Braithwaite. In one of the opening chapters, Nathaniel escorts Emily as far as Peverills’s adjoining estate, Beckles, where Mrs. Davenant reigns supreme and keeps nephew George under her mighty thumb.

When Nathaniel refuses to enter Beckles, Emily realizes that the social strata and relations between former owners and present freemen and women are still tense with an exploitative, violent, humiliating history. We are then introduced to the second narrative, set in the early nineteenth century, when Peverills was a financially-strapped but unscathed estate, and its abolitionist dreamer owner, Charles Davenant. Charles abandoned Barbados and his ownership of Peverills (eventually selling to Jonathan Fenty, Emily’s grandfather) after the slave uprising of 1816, when the estate was burned to the ground.

As Emily reviews estate records and speaks with people who knew her grandfather in his young, upcoming, Barbadian years, we alternately follow the story of Charles Davenant of 1812 (like Emily years later, newly arrived to Barbados from England to take over Perverills) and the adjoining estate’s mistress’s, Mary Anne Beckles, personal slave, Jenny. Of all the novel’s characters, Jenny looms the largest and most interesting. She is the heart of the tragedy of slavery and also symbolic of the possibility of happiness and freedom. Jenny is clever, strong, and adept at surviving amongst the whims and machinations of the petty, avaricious, exploitative people who surround her. Mary Anne Beckles is dark to Jenny’s light: cruelly capricious and selfish, she is attached to Jenny as her “property.” Mary Anne’s not physically cruel, but she views Jenny as born to cater to her, to lavish her with attention and see to her every need, from fanning during the heat to fetching and drawing and keeping her company. One of my favourite parts takes place when Emily sees a portrait of Mary Anne, with a vague figure hovering behind her, seemingly subservient, but the figure with the greatest story to tell and the greatest triumph over adversity — Jenny.

Emily’s journey is one where she uncovers how figures like Jenny, Charles, even Mary Anne, the past, is a place of subterfuge and secrets. Again, a theme linking Willig’s novels, including, albeit in a comic mode, the Pink Carnation series. In The Summer Country, Willig’s canvas is large: the historical struggles to defeat the injustice of slavery, of the sin of treating the other as property, as well as the personal journey, as entangled with history, of a young woman discovering an identity and its possibilities in a new world with a new sense of who she is. I think because Willig’s canvas was writ large, I had to be patient to follow what was a lengthy set-up to her stories. In time, however, I was rewarded with slowly, surely, and fascinatingly converging narrative lines. Willig is a master of narrative convergence through dawning revelations. Happily, the revelations, when they arrive, show her still-committed to the romance HEA. Willig’s Summer Country is a wonderful novel. With Miss Austen, we find within it “a mind lively and at ease,” Emma.

Lauren Willig’s The Summer Country is published by William Morrow. It was released on June 4th and may be found at your preferred vendor. I received an e-galley from William Morrow, via Edelweiss+.